It is past time for Christmas decorations and today was the day being my first full free day in something like 8 weeks. I was looking forward to it, and achieved my aim and learnt some stuff to boot. 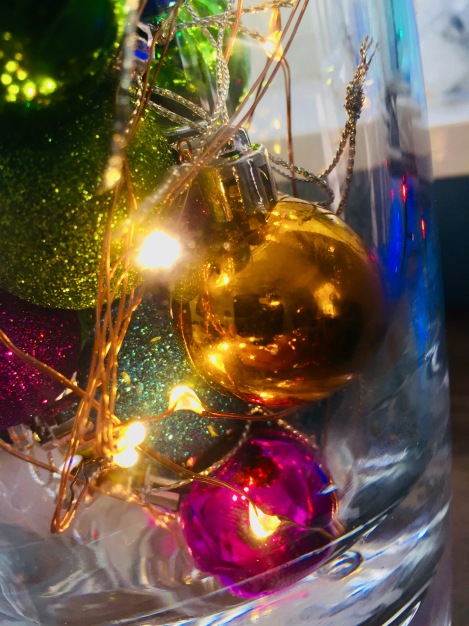 Earlier this afternoon I was sitting in this exact same spot with the left hand side of my face and lips tingling after a sequence of Emmett releases. You see I had a migraine. They can be debilitating and chronic lasting up to a week in really, really bad cases. Fortunately that doesn’t happen anymore as I am generally far more relaxed than a decade ago.

I awoke with it this morning as is common after  several high stress weeks. Like many, I carry stress in my neck, shoulders and jaw. Unlike many I have access to the tools of Reiki and Emmett to be able to relieve discomfort. About mid-morning, after some gardening and vacuuming, the head-ache became a bit much and I sat down put my hands on and slipped into a semi-sleep-trance for an hour or so. Coming back I felt considerably improved – had some lunch (appetite returning is a good sign 🙂 and locked horns with the rest of  my planned day.

After about an hour nausea and the headache enthusiastically returned for another round. I do know better – ‘Rest is best’ when I wake with one of these, but today I really wanted to get stuff done.

As the tingling from the Emmett releases subsided so did the pain – more than enough to get on with things again, and even get out and pester some sales people and amuse small children – their parents not so much. From past experience I know another Reiki session would have relieved the pain but would cost more than an hour – probably two, whereas the Emmett was about 20 minutes. Even that was a bit slow because I take my time letting every move have its full effect, and noting it, before moving on.

As Damian Hardwick noted when chatting to him about Emmett @Abitza a couple of years back  “…whatever gets them back on the track.” Sometimes we need immediate relief to “get back on the track” and that’s where Emmett is really useful. Results are usually immediate – but that does not mean it is wise to ramp straight back up to 100% effort.  There is something more insidious and ubiquitous about all this though – stress. In my case stress-release headaches, then the stress of wanting to get stuff done. Footballers – physical stress – then the stress of being off the track.

This “getting back on the track” mentality in everyday life I believe has led to the over-reliance on pharmaceutical pain-killers so evident today. Be in no doubt – all drugs have side effects, and despite the name “killer” they “mask” pain until the cause of the pain it self resolves.

So if you have a modality and can use it on yourself – reach for it before the bottle (whatever your poison :-).

May copious quantities of love-light-laughter be yours as well as the odd name dropping encounter.